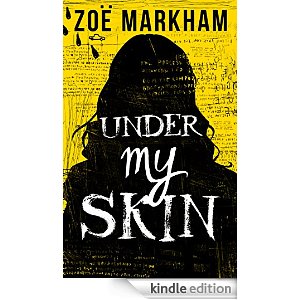 Title: Under My Skin
Author: Zoe Marham
Publisher: Carina Press
Publishing Date: 31st March 2015
ASIN: B00TOR142I
Back Blurb:
Inside we are all monsters…
Chloe was once a normal girl. Until the night of the car crash that nearly claimed her life. Now Chloe’s mother is dead, her father is a shell of the man he used to be and the secrets that had so carefully kept their family together are falling apart.
A new start is all Chloe and her father can hope for, but when you think you’re no longer human how can you ever start pretending?
A contemporary reworking of a British horror classic, Under My Skin follows seventeen-year-old Chloe into an isolated world of darkness and pain, as she struggles to understand what it really means to be alive.
Set against the familiar backdrop of everyday, normal teenage worries, Chloe’s world has become anything but…
Due for release on 31st March 2015, Under My Skin is available to pre-order now!
UK Amazon http://amzn.to/1BNRDu2
US – http://amzn.to/1BRAvot
About the Author

Having recently pulled off a dramatic escape from the rat race, Zoë now spends her days endlessly monkeying about with words.

In a tiny, tumbledown bungalow in the wilds of West Oxfordshire she creates, destroys, giggles maniacally and cries dramatically whilst consuming epic amounts of builder’s tea and trying to keep the cats off the keyboard.

Find out more about Zoë at her website: http://www.zoemarkhamwrites.com/

Wishing you all the luck with your first novel.