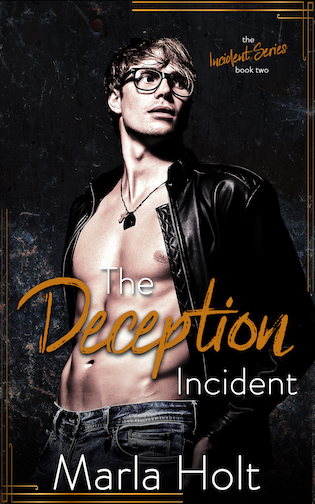 Her life is stabilizing and his is spiraling while they both keep secrets.

Minnie Halvarson moved to Kansas to start over. She wanted to be anonymous, live a simple life, and heal from her past. When Bryant Wilder walks into her bookstore, she thinks she’s hit the boyfriend jackpot. What more could she want than a tall, bookish man who worships her?

Until Minnie finds out he’s dating mega pop star, Van Birch and cuts all ties with him.

Bryant Wilder is a humble Kansas contractor by day and Van Birch’s fake boyfriend whenever she needs him to bel. At first Bryant is happy to do it, but after five years, he is tired of dodging paparazzi and keeping his hookups on the down low.

Who he wants is Minnie. But she won’t even look at him.

Now Van is back in Wellville, and has adopted Minnie into their friend group, Bryant is just as smitten with her as ever. Maybe if she hadn’t just had a baby, he’d actually have a chance.

The Deception Incident is the second book in the Incident Series. Dig into this steamy, instalove, secret baby romance with a guaranteed happily ever after by Marla Holt.

Bryant thought he might have died. On some level, he knew he lay in bed next to the voluptuous woman he’d been lusting after for weeks. That was the only way to account for the otherworldly satiety that had him feeling as though he’d left his body behind altogether and reached some other level of consciousness.

His mind was not functioning. Bryant couldn’t form thoughts, couldn’t speak words. This tiny woman, whom he’d thought so shy when he’d first met her, had rocked his world. It was as if her touch had electrocuted him onto a new plane of existence, because he was certain that he was no longer the same Bryant Wilder he had always been an hour ago.

Was that even possible?

The only thing he was sure of was that as soon as his body rematerialized and his thoughts could coalesce into coherence, he was going to have a new obsession. This woman. She was going to be the undoing of him.

The first conscious thought he had that didn’t have to do with the freewheeling pleasure centers in his brain was that he had to tell Van.

Telling Van what was harder to grasp. That he’d just had the most amazing sex of his life? Sure, he’d guess that might be something they’d discuss, but it wasn’t what he wanted to talk to her about. He couldn’t articulate why. He and Van talked about everything.

Then Minnie stirred in his arms, and Bryant fell back into his body. His limbs were heavy, his muscles relaxed, and he thought maybe he had been asleep for a little while. He didn’t remember getting rid of the condom, but he must have at some point. All there was in his memory was his skin on Minnie’s in a chilly room. He pulled her closer, not sure if they’d knocked all the covers to the floor or if the bed was still made.

Minnie rolled in his arms so her breath tickled his ear, then she skimmed her finger tips up his arm and over his collarbone. She scratched in the three day’s worth of stubble on his chin, then trailed up to tap on the hinge of his glasses.

“You still have your glasses on,” she said, a giggle in the back of her throat.

“Of course,” Bryant said. His voice came out in a decidedly unsexy croak. “I needed to be able to see every expression you made, every sensuous writhe, every shudder of delight, and I’m blind without my glasses.”

Marla Holt believes in second chances, romance, and the radical notion that everyone deserves a happily every after. She’s living her own fairy tale, writing contemporary romance novels in her Kansas farmhouse with her husband, three boys, three cats, and flock of imaginary sheep. Follow her at marlaholt.com or on Instagram as @marlaholtauthor