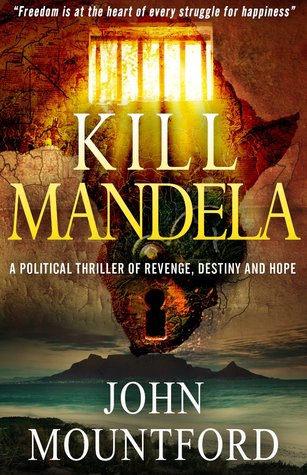 Jan Kruger has had the same nightmare for the past twenty five years: he opens his parent’s bedroom door, switches on the light, and is swallowed whole by the unspeakable horror that lies before him. Jan holds the imprisoned Nelson Mandela responsible for the trauma that robbed him of his heritage; and at last revenge is in sight.

Destiny and the broad platform of world history have overtaken the apartheid regime in South Africa. It is locked into endgame with the African National Congress, and intends to release the most famous prisoner in the world, Nelson Mandela.

But rogue agents of the regime seek to stop this. Will the ANC unleash the ethnic bloodbath of Project Vula? Will Mandela bring peace? There are those that will not take this chance: KILL MANDELA!

KILL MANDELA is the first novel in The Mandela Trilogy that explores the release, pain, joy and fear of the New South Africa – a saga of three families and the fateful meeting point between private and public life.

Jan Kruger’s vision of an Afrikaner nation set aside by God, called by Providence, custodians of a precious heritage, is torn asunder. His only wish is to protect his family and leave them some remnant of a legacy. Duty and service to the state have, for him, been debased into the shady world of counter-insurgency.

Jack Jarrard is an English immigrant, fired with ideals, social justice, enthusiasm. Outwardly he contends with a bitter marriage; inwardly he nurses a dire secret – his undercover work for the liberation movement.

Alpheus Mhambi is haunted by an act of terror, blood on his hands, and the desire for dignity, peace and reconciliation.
Can their children find a way forward in the maze of fear and suspicion, unknown territory, goodwill and deceit? Nelson Mandela, the world’s most famous prisoner, is to be released. A groundswell of reaction: KILL MANDELA!

I’ve read this book as part of our group Discussion on Goodreads.
I have to tell you, I don’t like politics and didn’t think that I would enjoy this book as much as I did.

Mr. Mountford done one hell of a job writing this novel. It covers more or less what happened twenty years back when Nelson Mandela was released from prison. I was only 14 at that time and was a really scary time in my life. We didn’t know what was going to happen with the new South Africa and will be be able to adapt to everything that will change. Again Mr. Mountford shows those fears through his characters and through many point of views and scenarios. I absolutely loved this book. Although a bit thick, I couldn’t put it down but was forced to at times since I have a very hectic reading and writing schedule.

His characters a developed in depth and to such an extension we had a chance to actually feel and experience what they had and questions about their actions will become yours. This story toyed with different emotions and I just have to give it to Mr. Mountford that capturing South Africa, especially Cape town is one of this books masterpieces.

He’s a real artist with words and paint our beautiful country to the last detail.

I will recommend this novel to anyone that like these type of stories. It is seriously one of the best I’ve written in a long time.