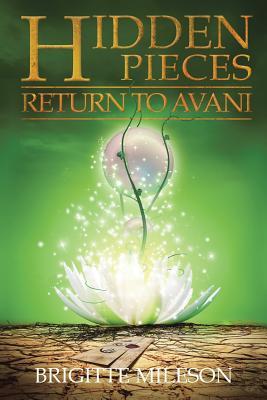 “I know who you are, and I know I am not the only person who has been looking for you…” Ever wondered how a few small words spoken just the right time can change your life forever? Guided by a mysterious and uncontrollable power, Tierra’s life suddenly becomes chaos as she races against time and the unknown to unravel the tangled web of the mystery and magic surrounding new worlds, ancient languages, symbols and gifts. Although determined to find out the truth of her past and what her future holds Tierra eventually has to go through her own journey of self discovery along a winding path fraught with excitement, deception, love and the smallest believe that she is not completely losing her mind. But….. With time running out and the unknown hunting her, will she make it or will she pay the ultimate price.

I was given a copy in exchange for my honest opinion.

Hidden Pieces: Return to Avani is a novel written by Bridgitte Mileson.

I really enjoyed it as it contains my two favorite genres: YA AND FANTASY.

Tierra is a beautiful, orphaned teenagers that has no memory of her past and where she comes from. She experience life that most teenagers would connect to. She is your typical outcast that only trusts herself. She’s a victim of bullying and has that typical crush on the boy. It;s a famous recipe that still works for YA novels. Even though it has been done so many times.
Sounds like a pretty ordinary teenager, but she’s not. She got a close connection to nature and an ability to heal broken bones.
This story gets really interesting when she gets a visit from a stranger. He gave her a letter stating that she must go to England and that others are searching for her too.
She finds herself in a magical world filled with symbols, creatures and other beings just like her, and had to learn how to survive by adapting to their reality, leaning new skills and become a master at the ones she already have.

It’s were her magical journey begins of discovering who she is and what she is destined to become.

I really enjoyed this one, even though it has pretty standard story, plot and characters of a fantasy world. I was pulled into it from the beginning with it’s action packed and fast pace story telling. However, I did find some contrast problems through out the novel that didn’t add up or felt real, but all in all, it was an enjoyable read and will recommend it to anyone that loves a good YA FANTASY.

I wish you all the best of luck with Hidden Pieces: Return to Avani and hope that there will be more to come.