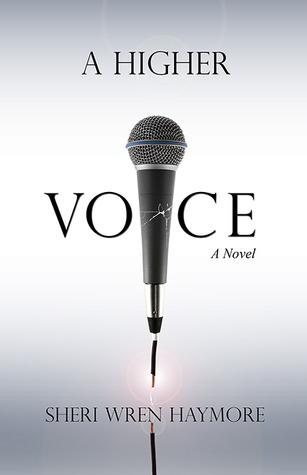 Legendary rock singer Britt Jordan is at the pinnacle of his career-at least as far as the world knows. But Britt’s voice is failing and a terrible event in his past haunts him every moment. He thinks that his life is a hopeless shipwreck…until the night he is stopped dead in his tracks by a woman’s smile. With the same determination that propelled him to stardom, he begins to create a new life with Dena and her daughter, Bonnie. Britt’s presence in Dena’s life brings more than paparazzi, however. His baggage includes a brother who wants to destroy him and a stalker intent on killing his wife. Willing to sacrifice any price to save his family, he finally must find a higher plane on which to face his past and his future.

I was given this copy by the publisher for my honest review.
I liked The Higher voice. It’s a debut novel of  Sheri Wren Haymore.
I love the concept, Britt, a superstar musician and the good woman, Dena, who in so many ways becomes his only way of existing.
There is plenty of conflict, inner and outer, on every page of this story which makes it a good book to read.
I loved Britt and Dena, I thought they were really amazing, developed, characters and connected to them easily.
The plot was good, enjoyed it and I think this is a story worth reading.
I would just like to understand Philip a bit more. That was the only thing I couldn’t properly figure out. Why he hates his brother so much. I feel there was a bit more to it.
Good luck, and thanks. I will add the review up on every site.
Adrienne
Advertisement