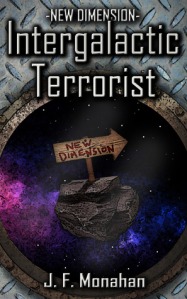 ‘Intergalactic Terrorist’ follows Charlie Pinwright, possibly the most forgettable man on Earth, who, in the space of a few days, loses his job, has his flat rented out to a family of butchers and finds his girlfriend cheating on him with a Spanish cake decorator. Oh, and he is kidnapped by a crazy alien bounty hunter and sent into a new dimension full of strange worlds and even stranger characters, all who want to see poor Charlie dead!

Desperately trying to return home, Charlie finds himself a wanted man and is hunted by all the major powers of this new dimension, quickly becoming one of the most memorable men in the universe!
However there is much more at stake than his own life and he soon discovers that the fate of the entire galaxy may rest on his shoulders…

‘Intergalactic Terrorist’ is a comedic sci-fi/fantasy that is filled with brilliant characters and strange and exciting story twists!

I must admit, I'm not a huge Sci-fi fan, but when Joseph asked me to read this one, I couldn't say no. I mean, just look at the description.

Intergalactic Terrorist follows Charlie. He lost his job, then gets abducted by an hilarious, and I mean really funny, trouble making race of aliens. And it happens all in one day.
I got to give it to Joseph, There were actually moments that I laughed out loud. He has one of those writting styles that you can easily follows and enjoy. His characters and plots were so well developed that some might even read this a couple of times to catch some things you've missed out the first time.

The only thing that I didn't like was some editorial issues. Now I must say that I have a very trained eye for these sort of mistakes, because I'm an author myself and we push ourselves to concentrate on errors. I doubt that some readers will catch it, but if they do, it wasn't that major. It didn't spoil the novel for me like some other novels do.
The other thing, there were a couple of slow paced scenes that distracted me from the main story line. Did Joseph meant to do this, maybe. Usually authors that writes series, do that, and explain it further in detail with the second novel.

I'm going to give Intergalactic Terrorist a five star.
Does that mean I'm a sci-fi fan?

Not yet, but I'm getting there.

Good luck with Interglactc Universe Josheph, really a must read for all sci-fi lovers.

1 thought on “Review For Intergalactic Terrorisy by J.F Monahan”