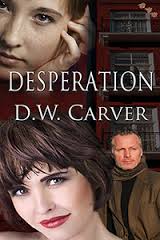 Desperation is the new novel of author D.W.Carver. I’ve decided to do a small blurb on the book and an interview on the author. You will see where Desperation can be purchased below the interview. Please support this author and get your copy now.

Kate thought that once her mother died, the pain she had caused would
end. Then she discovered that a letter had been sent to a prominent
television presenter on her mother’s orders taunting him with the fact
that Kate now held photographs which would ruin him and probably lead
to his arrest. Suddenly Kate is running for her life. She seeks help
from Rob, a much older man whom she has only known for a very short
time. While at his London apartment, she rescues a teenage girl,
Vickie, from a street pimp and over the following days finds a bond
growing between them that feels like a lot more than friendship; but
with both their lives now in danger there is no time for thoughts of
anything but escape and survival.

AW: Where do you live?
DC: East London, England

AW: Are you married, children, animals?
DC: Married with three sons and two grandsons. My youngest son has a cat. I had a dog who died three years ago. I’m still grieving.

AW: How did you come up with the story line of Desperation?
DC: I spent many years working as a community mental health counsellor and met a lot of emotionally injured women. Kate and Vickie in ‘Desperation’ sprung from that. My heroines don’t take shit from anyone.

AW: What do you do when you are not writing?
DC: I sleep…a lot

AW: When did writing became a passion for you?
DC: I don’t recall a time when it wasn’t.

AW: What is your number one belief?
DC: I spent many years working with people who had been badly harmed by the significant adults in their life. I would really like to see parents help their children to grow into their own people and not force them into small versions of themselves.

AW: Who is you favorite author?
DC: Kurt Vonnegut

AW: When will Desperation be available?
DC: It already is. Published on the fifteenth of July
AW: Where can you buy Desperation?
DC: Amazon Barnes & Noble et al, The PorchFront website

Thank you so much and I really wish you all the success with Desperation.